So it’s that time of year when my blogging friends usually post an annual recap. I’ve never done one before, but 2015 felt like several years crammed into one.

Although I’ve been blogging sporadically since 2010, I started posting more consistently in September 2014. Working at my college newspaper for a few years tightened my words and enabled me to synthesize ideas for tight deadlines.

Home – I love that movie for so many reasons that I wrote a blog post about it.

Pan – I posted this after leaving the theater:

The Visit – One of my favorite Shyamalan films yet. But I also loved The Village, Sixth Sense, and Lady in the Water.

Crimson Peak – Now I understand the Tom Hiddleston fangirling. I found an excellent analysis of how the film subverts Gothic literary tradition over here. 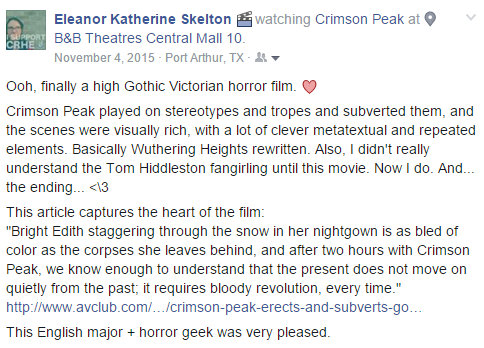 The Unbreakable Kimmy Schmidt, because I am basically Kimmy. My friends Midget and Silver even say so. I was the first person they thought of when they started watching it.

Supernatural, because my friend Ashley finally convinced me to start watching the series. It resonates so strongly with how I view the world. I watched seasons 1 and 2 this summer during downtime while working at a call center.

Blonde Roots by Bernadine Evaristo – My friend Shelby lent me this satirical fantasy written as if the slave trade had happened in reverse, with Africans capturing Europeans. The continent of Aphrika is north of Europa, making the geography of Evaristo’s world literally upside down. There’s even a version of the Underground Railroad.

Stolen Innocence: My Story of Growing Up in a Polygamous Sect, Becoming a Teenage Bride, and Breaking Free of Warren Jeffs by Elissa Wall – This memoir haunted me. I did not grow up FLDS, but I understand isolation, I remember trying to dress like a pioneer girl, and I lived in a high control group. Elissa’s story hurt to read, but I was so glad she was able to break free.

Dream Interpretation as a Psychotherapeutic Technique by Fredrick Coolidge – This is a textbook for a psychology class at my college, and it packs a comprehensive but succinct summary of the history of dream interpretation, the science of dreams, and facts about PTSD and nightmares.

If you’d like to see more of my reading list, you can follow me on Goodreads. (Also, I need to find an app for keeping track of what movies I’ve watched.)

Best Webcomic: The Awkward Yeti. The struggle between Heart and Brain is so real.