I’ve always known I was weird.

An entire table of public school kids crowded around me in driving school, peppering me with questions. I was one of two homeschooled kids in the classroom. Elsie, the other girl, and I later became friends.We both felt like outsiders, but I told my mom later that I felt “like a green alien who just dropped in from Mars” around those kids.

Some days I’m halfway convinced that I’m not actually human, just an imposter, like the zombie dude in Warm Bodies.

When I first went to college, I stood out, because I was extra happy and cheerful all the time, like this:

I would meet someone for the first time and be like FRIENDS FOREVER.

And I invited people over ALL the time. They were understandably annoyed.

The friends I made quickly learned that Eleanor is random. Very random.

We took cross-country roadtrips and discussed philosophy late into the night.

And the outside world contained many surprises.

Like new tunes. Synchopated music was not allowed, because Satan.

“In order to develop their spiritual and aesthetic discernment, BJU encourages students to listen to classical and light classical and traditional sacred music.” – The 2012 Bob Jones University student handbook.

No rock, rap, jazz, or country.

Our little purple hero Oh tells his new friend Tip: “The Boov have only one song! It is called motionless and obedient.”

And then this happened.

“Because of the sensual nature of many of its forms, dancing is not permitted.”– 2014 BJU student handbook

Captain Smeck will not approve of this.

There was a lot of culture to catch up on…   Eleanor : pop culture references :: Oh : jokes 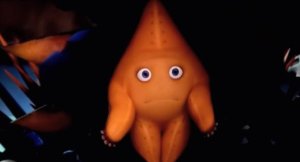 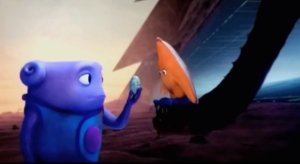 They didn’t want to persecute me. They were afraid I would hurt them. 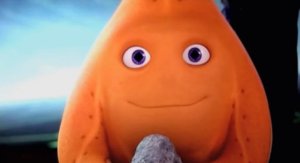 This is why I love Dreamworks’ new film. It’s a story for people who used to live in a box.

And did I mention the dubstep on the soundtrack is pretty great, too?